Skillz offers you the ability to set up several different types of tournaments through which players can compete for virtual points, or cash. You can set up Tournaments in the Skillz Developer Console:

In Skillz, tournaments are either asynchronous (what we call Play and Compare) or Real-Time Synchronous.

Play and Compare tournaments are asynchronous. This means players do not have to wait to be matched with another person and compete in realtime. Instead, any time a player enters a tournament they will immediately be put into a game. Their score will be recorded and matched against another player with a similar rating. If a match isn’t immediately found, Skillz will hold on to that player’s score and wait for another player with matching skill to enter the same tournament.

In Real-Time Synchronous tournaments, players are matched with another person and compete in real-time. Any time a player enters a tournament they must wait for another player to enter before being put into a game. Each player will see the opponent's progress in real-time, and aborting will immediately end the tournament.

These are the “standard” type of tournament, pitting two players directly against each other in a winner-take-all competition. Most Skillz games implement this kind of tournament, and they’re the best kind when still in the process of building up your player population.

In Multiple Player tournaments, you can have four players compete for the best score in the game. As in Head to Head, a lone winner takes all of the proceeds. These tournaments are best suited for games with large player populations, as more players are needed to fill in these games.

If your game supports standard tournaments, then it already supports Multiple Player tournaments as well! The differences between the two are all managed by Skillz.

Players in Skillz tournaments can choose between competing for Skillz Virtual Currency (known as 'Z') or for real money. While 'Z' may be used for certain in-Skillz purchases, only cash can be withdrawn from the system. 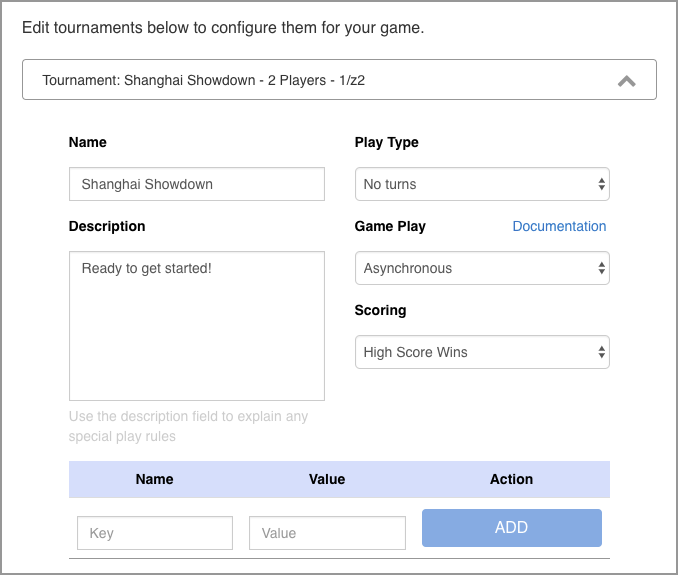 Along with configuring different tournament types and price levels, you can also customize different types of games by setting up Gameplay Parameters on the Skillz Developer Console.

As you can see, the possibilities are endless. When set up thoughtfully, gameplay parameters can increase user engagement for your game and therefore increase monetization opportunities. If anything, they're an easy way to add excitement and replayability to your game.

Gameplay parameters are set up in the Skillz Developer Console for your game. Please head over there and set some up before attempting to retrieve them from your game.

If your game is made with Unity, you can simulate gameplay parameters using the Skillz Unity Companion.

In this example, MainActivity is the activity that will be launched when a match begins. As a precaution, we call Skillz.isMatchInProgress() to check if the there actually is a match; otherwise, there won't be any gameplay parameters to retrieve.

After that, the TimeLimit gameplay parameter is retrieved and parsed into an integer.

In this example, SkillzGameController implements the SkillzMatchDelegate interface so that it can be notified when a match is beginning. when that happens, OnMatchWillBegin() will be called and provides gameplay parameters in the matchInfo parameter.