Skip to main content
This is documentation for Skillz 27.1.3, which is no longer actively maintained.
For up-to-date documentation, see the latest version (28.0.5).
Version: 27.1.3

This article will walk you through installing the Skillz SDK in your Unity project.

Decompress the file after it has finished downloading. Everything will be decompressed into a folder named sdk_unity_<SDK_VERSION>. Relative to that folder will be /unity/skillz_unity-<SDK_VERSION>.unitypackage where SDK_VERSION is the version of the Skillz SDK that was downloaded.

With your project open in Unity, click the Assets > Import Package > Custom Package... menu item. Select the skillz_unity-<SDK_VERSION>.unitypackage file from the previous step.

A dialog will pop up where you can choose the assets from the package to import. Click the All button to select all. Next, click the Import button. 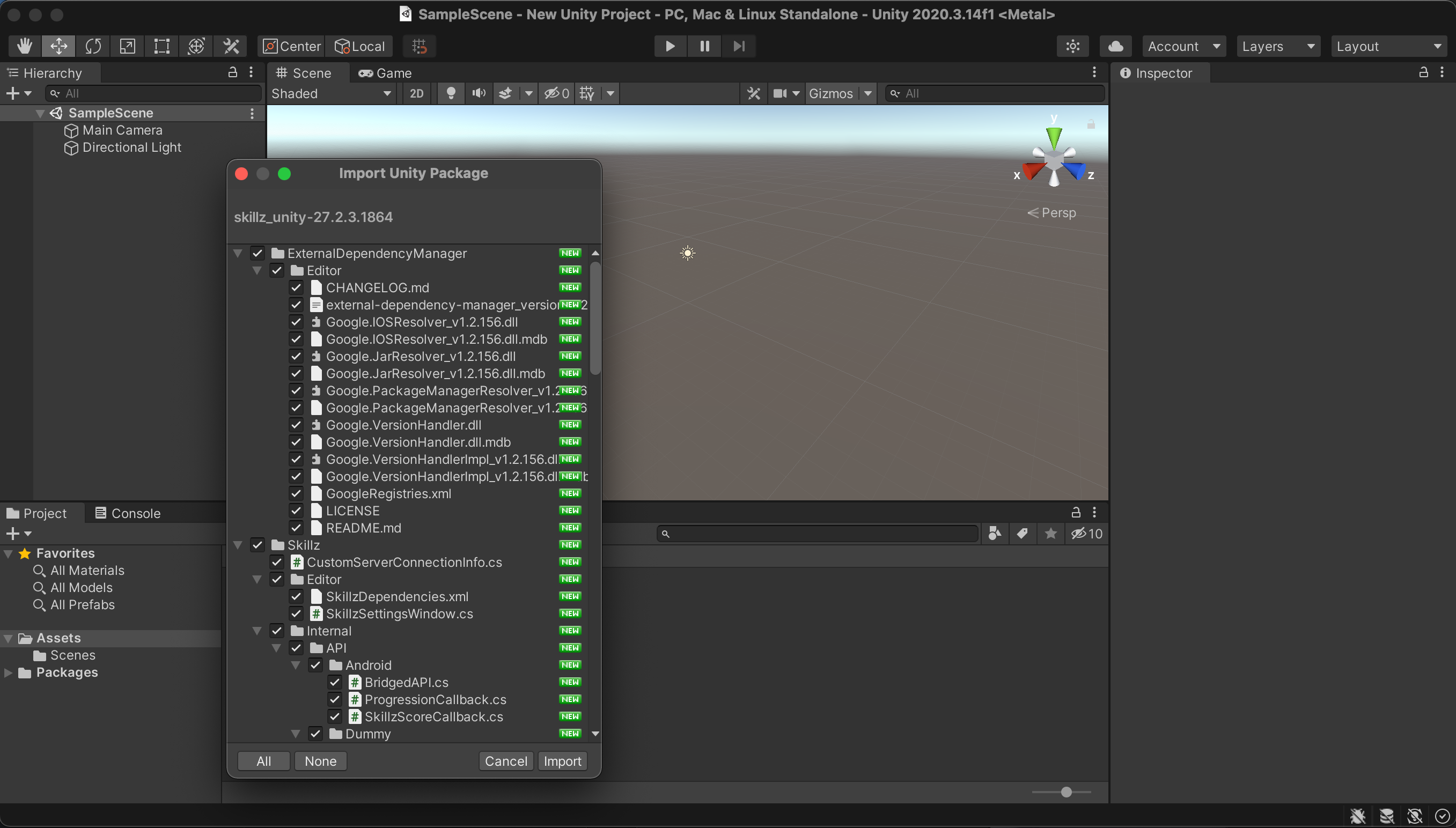 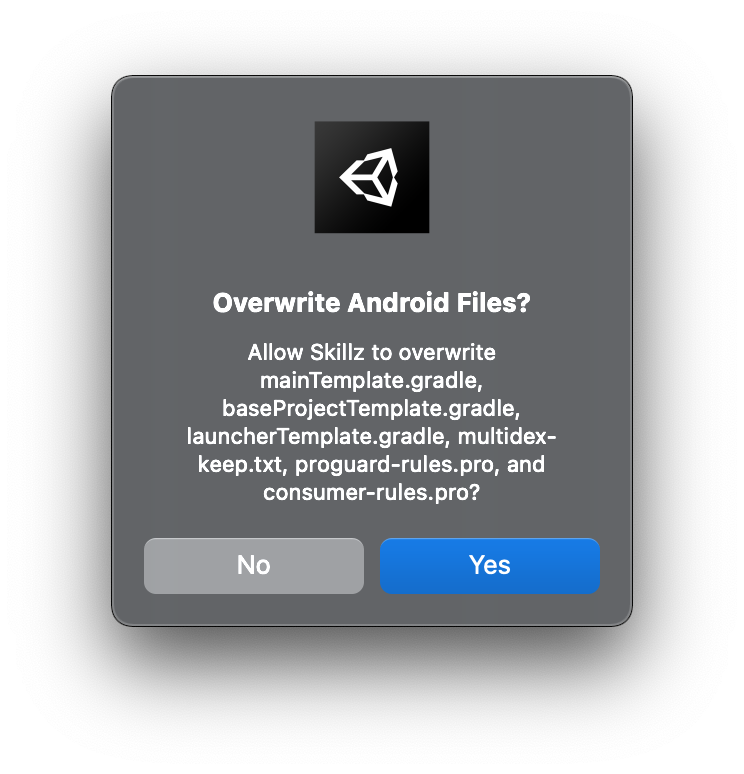 Skillz bundles a plugin by Google called the External Dependency Manager (EDM), which is used to resolve Android dependencies. On import of the Skillz SDK, EDM will display a dialog, similar to the screenshot below, to ask if you would like to add additional Unity Package Manager registries. Click the Disable Registry Addition button to dismiss the dialog. 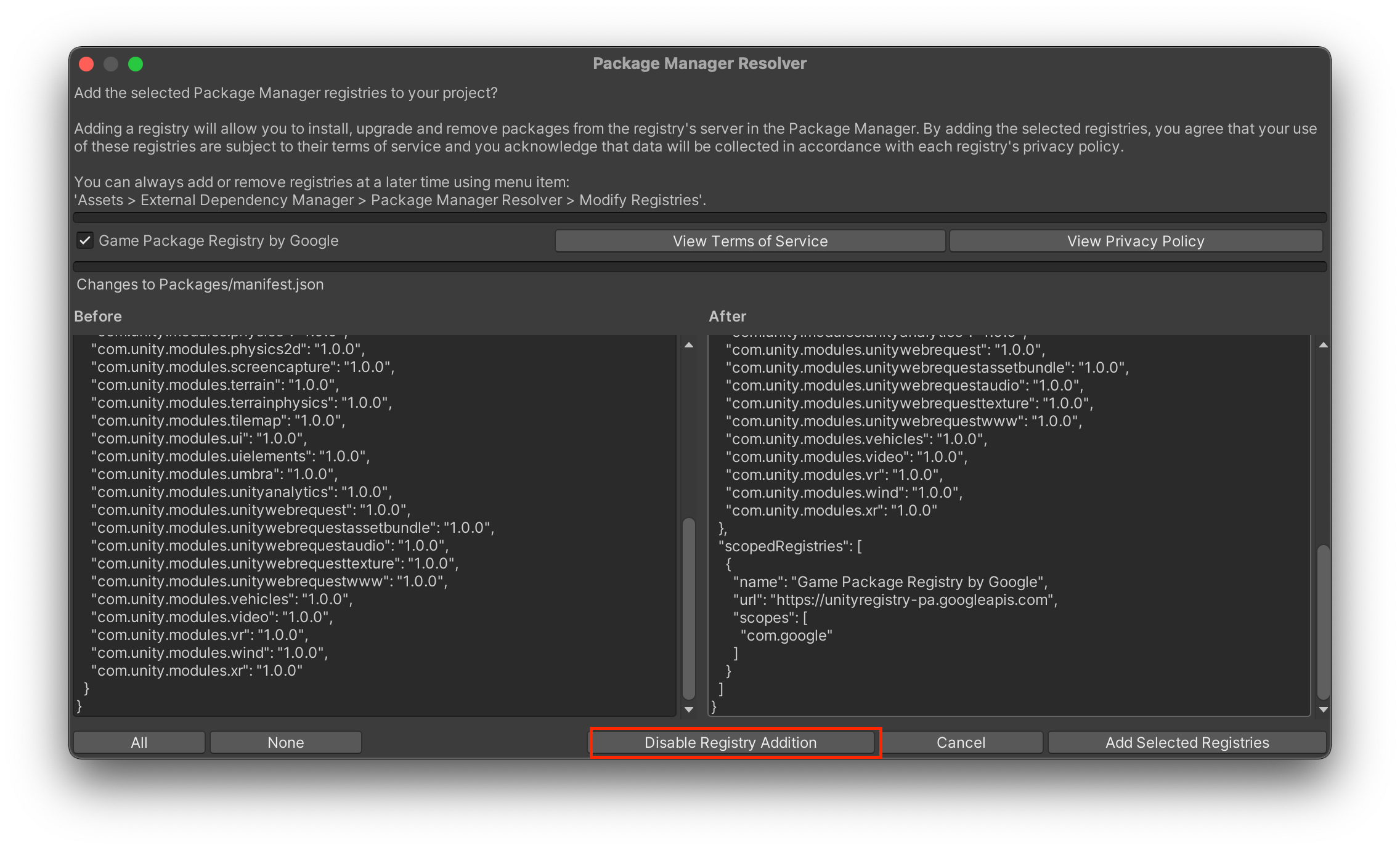 The Skillz SDK is now installed in your Unity project. You should see an Assets/Skillz/ folder in your project tab.

There is nothing to do for iOS. Continue to next step.

Skillz for Unity is bundled with the External Dependency Manager plugin. This plugin will resolve transitive dependencies between multiple libraries (that support it) for Android, such as Skillz and Firebase. However, preliminary configuration is needed: 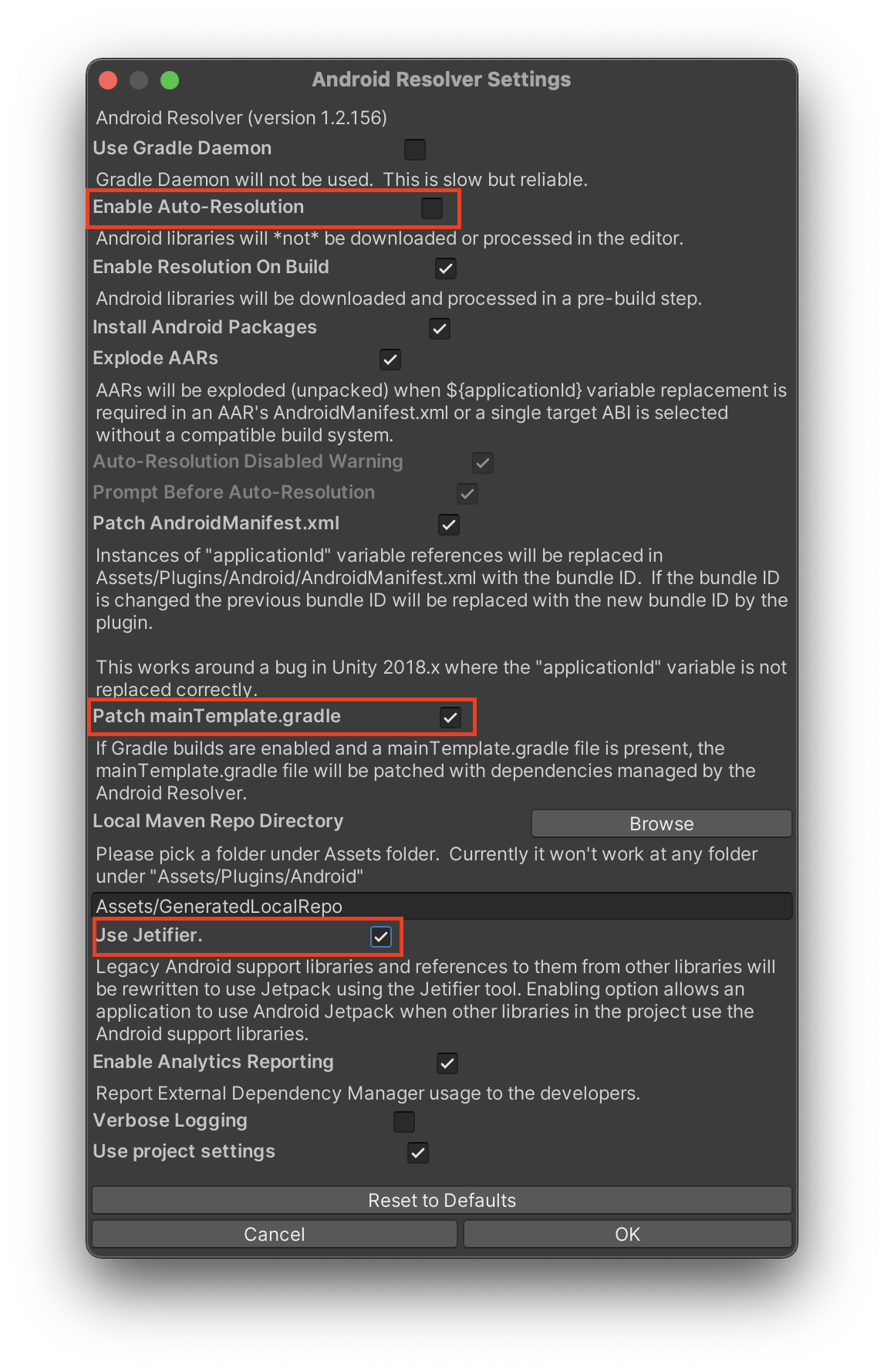 Afterwards, verify that mainTemplate.gradle was modified to ensure that all resolved dependencies are listed.

The dependencies section should look similar to this snippet before modification:

And it should look similar to this snippet after modification:

If the file did not appear to be changed, you may have to save your project, reopen it, and select the Assets > External Dependency Manager > Android Resolver > Force Resolve menu item. 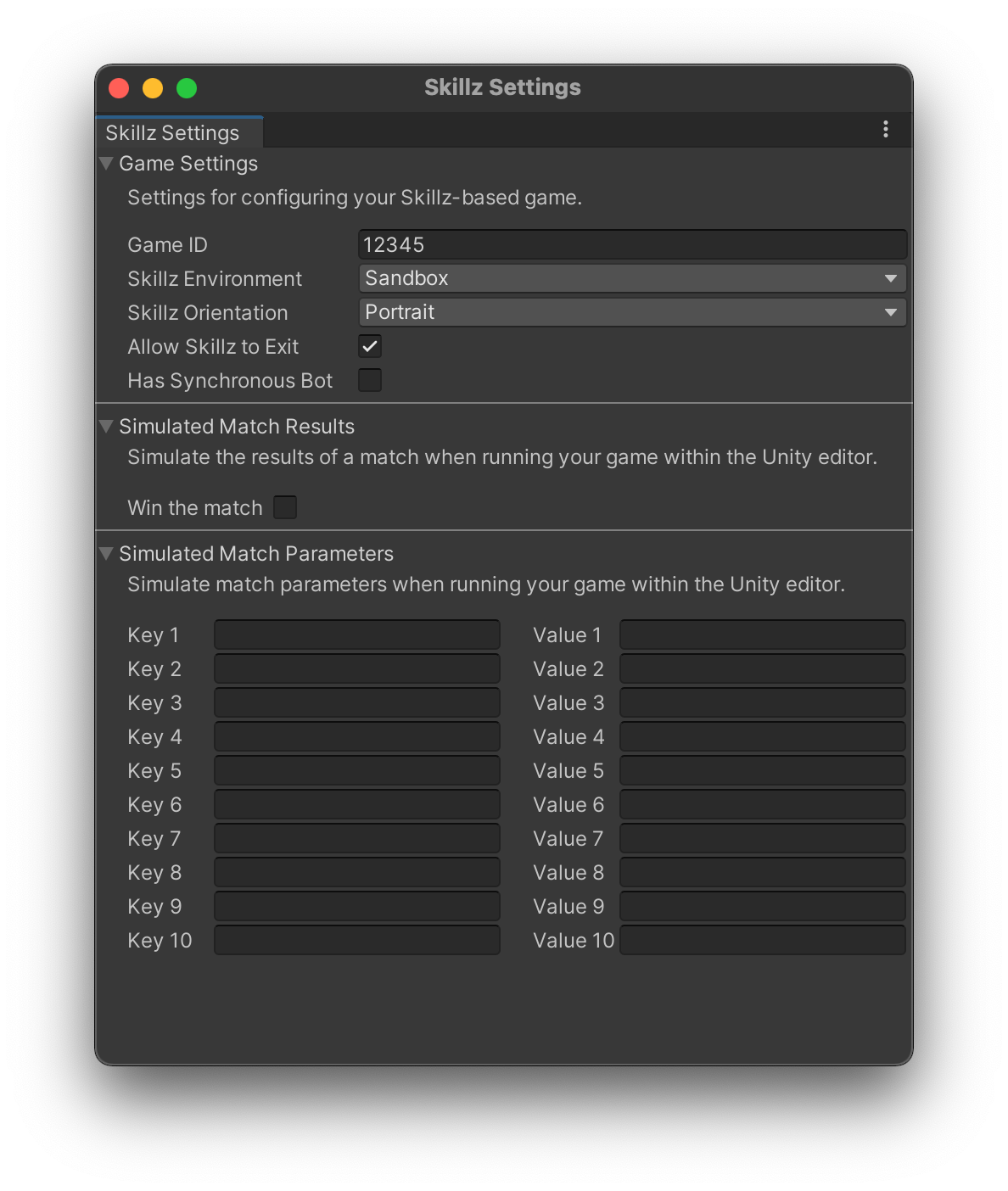 Set your Game ID, the environment (Sandbox or Production), and the orientation for your game.

Additionally, you can choose if users are allowed to exit the Skillz UI via its sidebar menu. 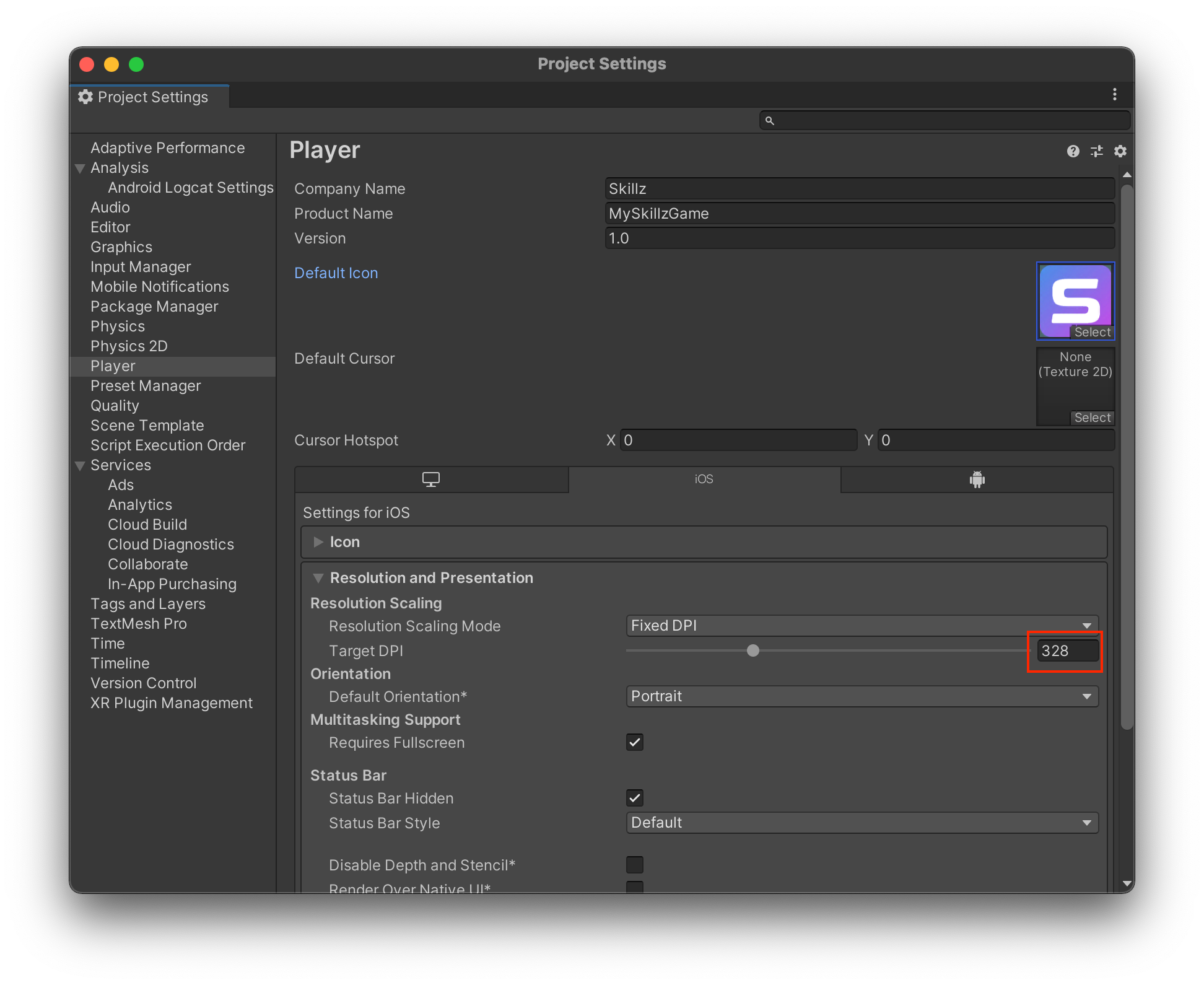 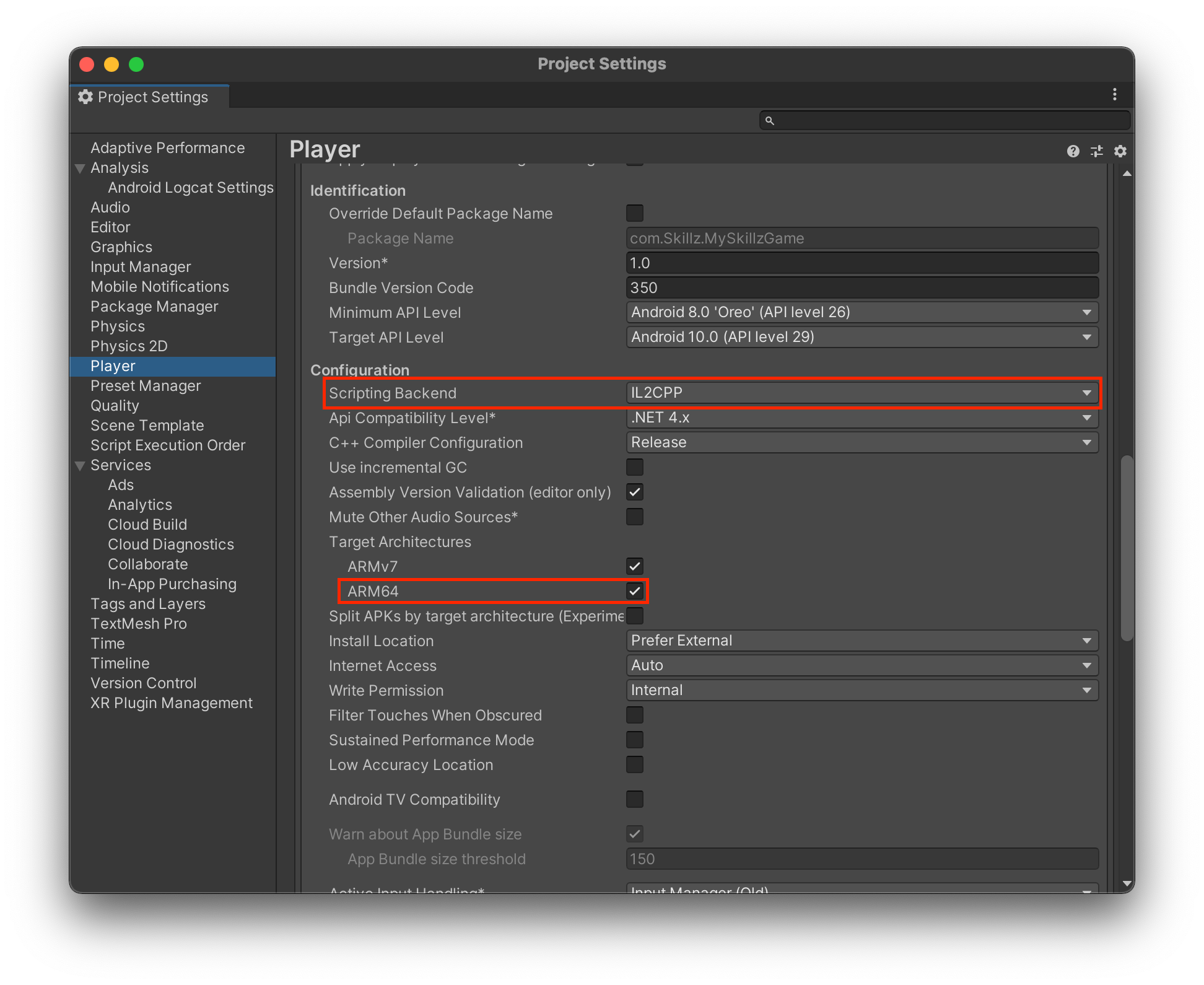 6. Close the window. It will automatically save your new settings

After the successful creation of the Xcode project, open the project. In {Project}/Classes/, locate and open UnityAppController.mm. Find the method called application:supportedInterfaceOrientationsForWindow. Currently, this method's body looks similar to:

Since Skillz doesn’t support switching orientations between portrait and landscape, you’ll need to modify this function to support only either portrait or landscape:

Click Export to initiate the build process. Unity will prompt for a desitnation to save the Android Studio project.

It is suggested to build and run the project on the target platforms to resolve any conflicts or issues prior to further Skillz implementation. Once the project has been tested, please move on to implementing the Skillz UI.

If you plan on adding Firebase to your Unity project, we recommend you use Unity Firebase 6.15.1, as it has been tested with the Skillz SDK.